Fully Baked is a new, all eggless, dessert cafe that serves a variety of cakes, cupcakes and exquisite French desserts all paired with a perfectly made cup of Blend Africa coffee and specialty teas from The East India Company.

The playful macaron stools at the window bar add the perfect bright accent to the café, while a window display showcases their tea/coffee collection on one end and two display stands show off their dessert collections. It is safe to say the cafe’s innovative eggless desserts are irresistible. 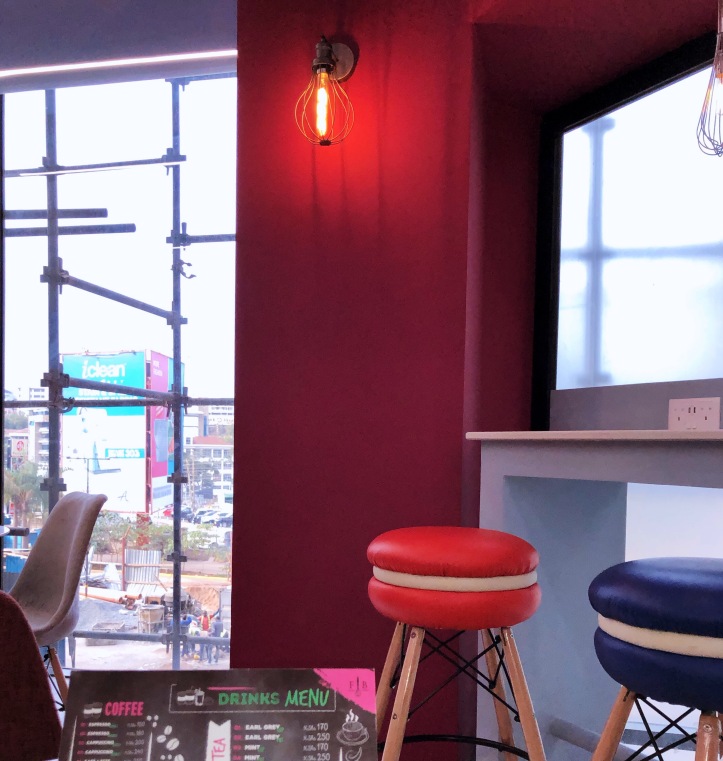 So, one Saturday afternoon, after returning from our trip to Norway, Diva and I were invited to try their Autumn-themed afternoon tea. For just Ksh. 1500/- per person, they were offering three savory items and three sweet items with a pot of tea or coffee.

Arriving around 4PM, we sat on the tables inside the rather cute but cozy café.

As we ordered our Bombay chai, we were served the savories first. Unlike the traditional afternoon teas, this wasn’t served on a tiered platter, but on a plate. We got a Cheese Pie, Spinach and Feta Muffins and Pumpkin Scones. All this was served alongside an array of condiments, including green chutney, ketchup, whipped cream and jam. 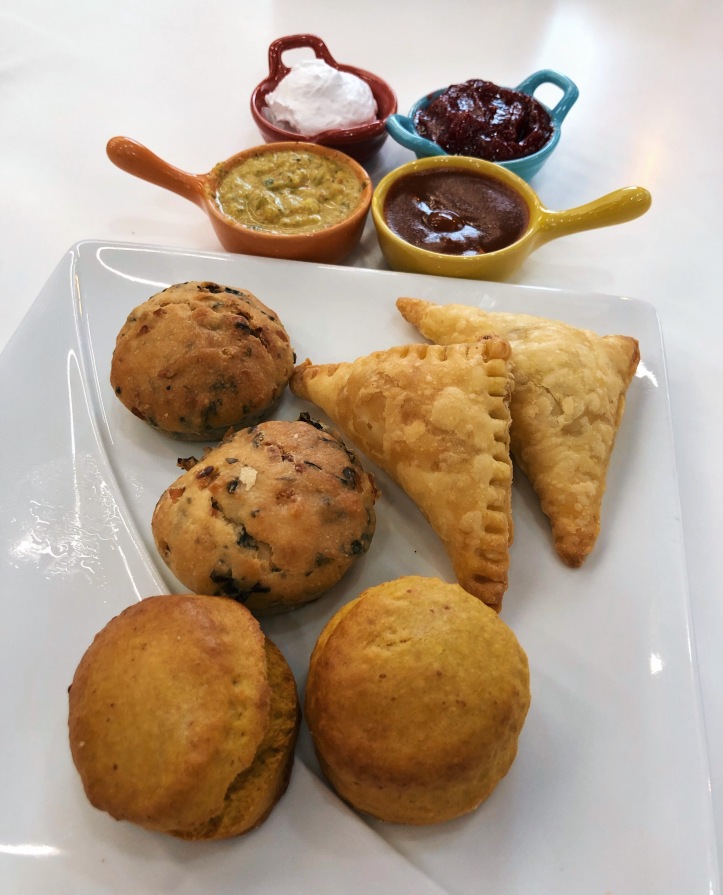 Their flaky, warm cheese pies were an instant hit. They were quickly gobbled down. The spinach and feta muffins, while delicious, were a healthy option that just didn’t work for us. While being flavourful, I found them to be slightly underwhelming.

The Pumpkin Scones were delightful with the whipped cream and jam. A little denser than normal scones due to the addition of pumpkin, the scones just missed a smear of clotted cream.

The Bombay chai arrived then. A little milkier than we’d have preferred (perhaps it was because we asked for it mixed), the spicy chai paired really well with all the food items.

Next, to top it off was the dessert course. We each got a Mini Pumpkin Pie, Apple Rolley Polley with Cinnamon Sauce and a Pecan Brownie (which was actually a surprise item on the menu). All these were served on individual personal plates that were garnished with a gold-painted chocolate leaf to symbolize the fall foliage.

I absolutely love both cinnamon and apples in desserts, but I found the cinnamon sauce to be overpowering the Apple Rolley Polley, so much so that I could barely taste the apple in the dough-y dessert.

Trying them for the first time, the Mini Pumpkin Pies were delectable. The flakey crust and the sweet spiced pumpkin filling was so good, especially when scooped up with some of the chocolate leaf garnishes. The chocolate complemented the pumpkin’s density and creaminess so nicely. 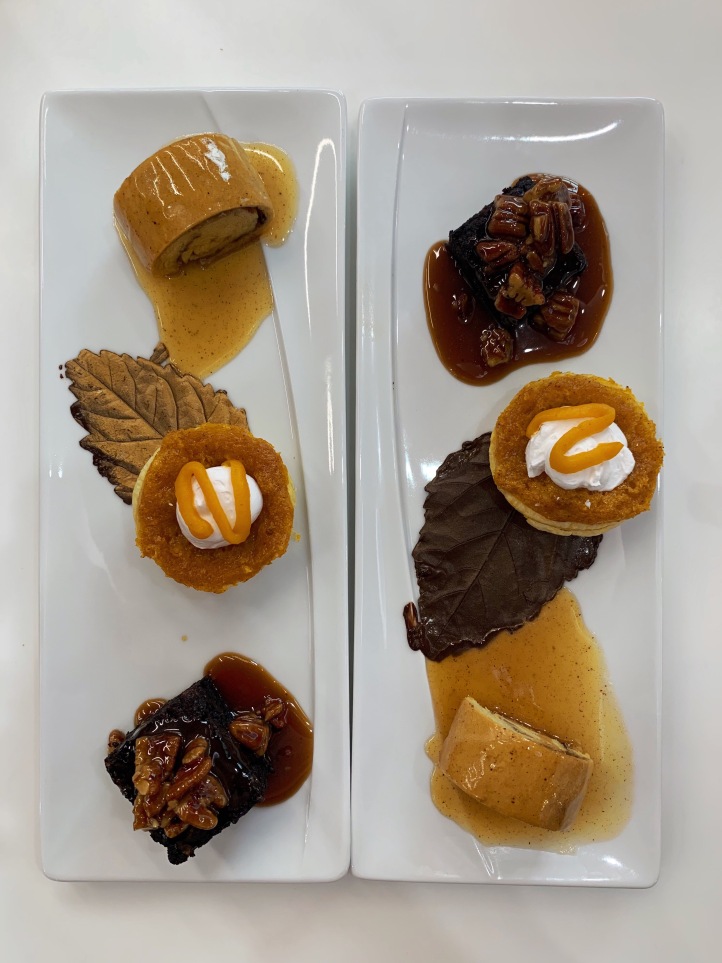 The final dessert we had was the pecan brownie, a fudgy chocolate brownie topped with a gooey caramel sauce and pecans. Luscious and oh-so-rich, this was my absolute favorite brownie that now sits among My Top Five Brownies list. (Any guesses who else has made on that list?)

Fully Baked’s The Autumn Affair afternoon tea was only a one-off event, but I see myself returning to the cafe for a slice of cake. The service was incredibly attentive and we truly enjoyed ourselves. 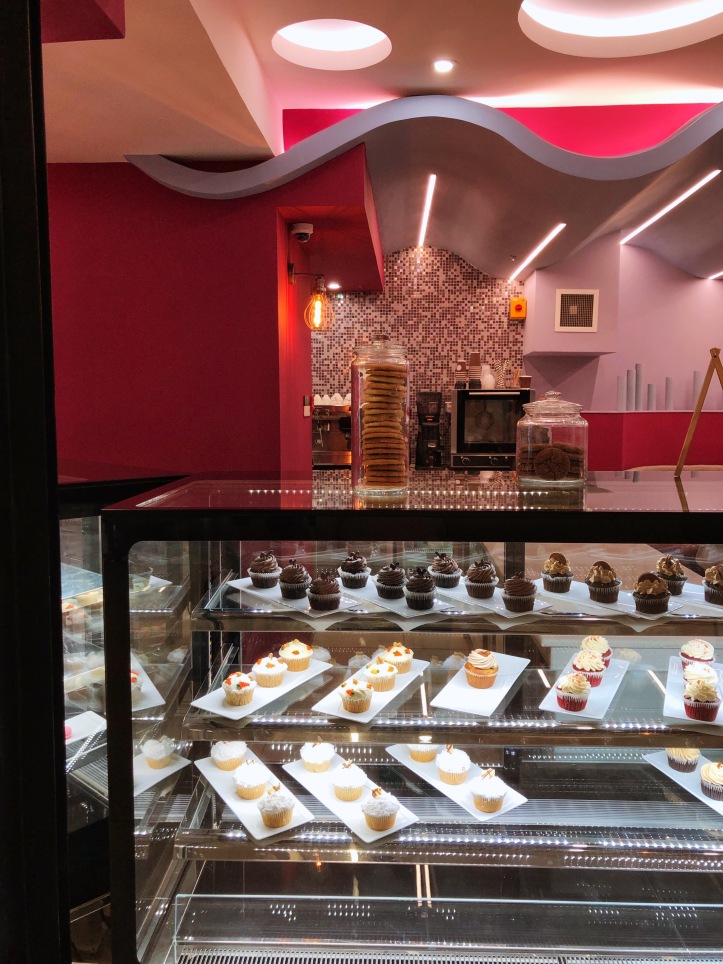 Have you been to Fully Baked? Tell me what you think of it in the comments below.

DISCLOSURE: Our afternoon tea was complimentary, courtesy of Fully Baked. However, all views and opinions are entirely my own.

There was an error retrieving images from Instagram. An attempt will be remade in a few minutes.