If you’ve ever been in Westlands during the week, then you know the traffic is usually insane. So, if you work in the area or find yourselves in the area during lunch time, save some of that precious time and organize a work lunch at the Mövenpick Nairobi. Close that deal or forge that business connection overlooking the green city under the sun at Mövenpick Hotel & Residences Nairobi’s rotating restaurant: The View.

Having just opened in April 2018, visiting their signature revolving restaurant on the hotel’s 24th floor had long been on my list, but I was just waiting for the rains to clear up so I could enjoy a 360-degree panorama of the city while enjoying some delicious Swiss cuisine, especially since I had been reminiscing Switzerland recently.

As luck would have it, I recently got invited to The View to sample their new business lunch. Upon arriving on the 24th floor with my co-workers, we were ushered into the circular revolving restaurant. As we sat down, I appreciated how each and every table had access to the large windows. The restaurant’s wooden architecture can transport one to the Swiss Alps, especially with the simply elegant white-draped tables and the Swiss bells hung up on the walls.

Of course, the only thing reminding us that it is, in fact, Nairobi we are in, was the aerial views of the urban city.

Excited to see the aerial views of the city, we opted to snap a few pictures before settling down to order.

The Mövenpick Business Lunch is offered every Tuesday through to Friday from12.30 pm till 3.30 pm for Kshs. 2200 for two courses and Kshs. 2600 for three courses. The menu changes daily and there are vegetarian options available too.

Excited for our meal, we couldn’t pick what to order. To start us off, we all ordered a selection of tropical and orange juices to drink for the table.

As we waited for the food, we nibbled on the bread, served complimentary on the table with some assorted herbed butter. The bread was scrummy, though I wish the butter was served at room temperature as it was too cold and hard to spread onto the bread. 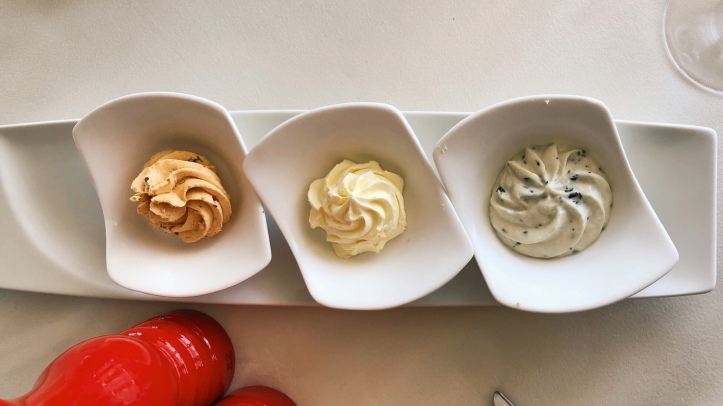 For our starters, we had a choice of Potato Leek Soup with Crispy Beef Bacon or a Zucchini Tart served with Crème Fraîche and a seasonal Salad Bouquet. While two of my companions chose the Potato Leek Soup which they quite enjoyed, my vegetarian colleagues and I had the Zucchini Tart which was served alongside a dollop of crème fraiche and a leafy green salad.

While the salad was average with a rather oily dressing, the tart was delicious with layers of zucchini and an egg mixture in a crispy pastry shell. It was a delectable starter!

For the mains, the choices were a Roast Beef with Onion Gravy and French Fries or a Chicken Cordon Bleu with French Fries. My co-workers ordered both the roast beef and chicken options, saying both were scrumptious.

We were told that they would be vegetarian options, but I can’t deny that I was a little disappointed when they handed my vegetarian cohorts and me their main menu and gave us a choice of three pastas to choose from: Vegetable Lasagna, Penne All’ Arrabbiata And Spinach Ravioli with Goat Cheese. It was just that I was hoping for something a little more exciting.

My companions ordered Penne All’ Arrabbiata – the classic vegetarian staple of penne pasta in a spicy tomato sauce, which they relished after topping the dish with green chillies for some extra heat.

I, on the other hand, decided to be a little adventurous and ordered the Spinach Ravioli with Goat Cheese, which comprised of ravioli stuffed with spinach and goat cheese served in a creamy lime sauce with blistered cherry tomatoes and topped with roasted pine nuts. While the ravioli itself was al dente, the creamy lime sauce was too tangy for me and I think the cherry tomatoes added to the tartness. Instead, I wished there was something sweet to counter the tanginess. However, adding the requisite green chillies in olive oil helped to counteract the sourness of the dish.

For dessert, we had the choice between a fresh fruit salad and chocolate pear mousse. Obviously, we ordered the mousse, which was a chilled chocolate mousse on a bed of candied pear slices and cookie crumbs, garnished with a white chocolate shard and a strawberry. The mousse was rich and creamy, while the candied pear was my absolute favorite bit as it added a fruity burst of freshness to the sweet chocolate. 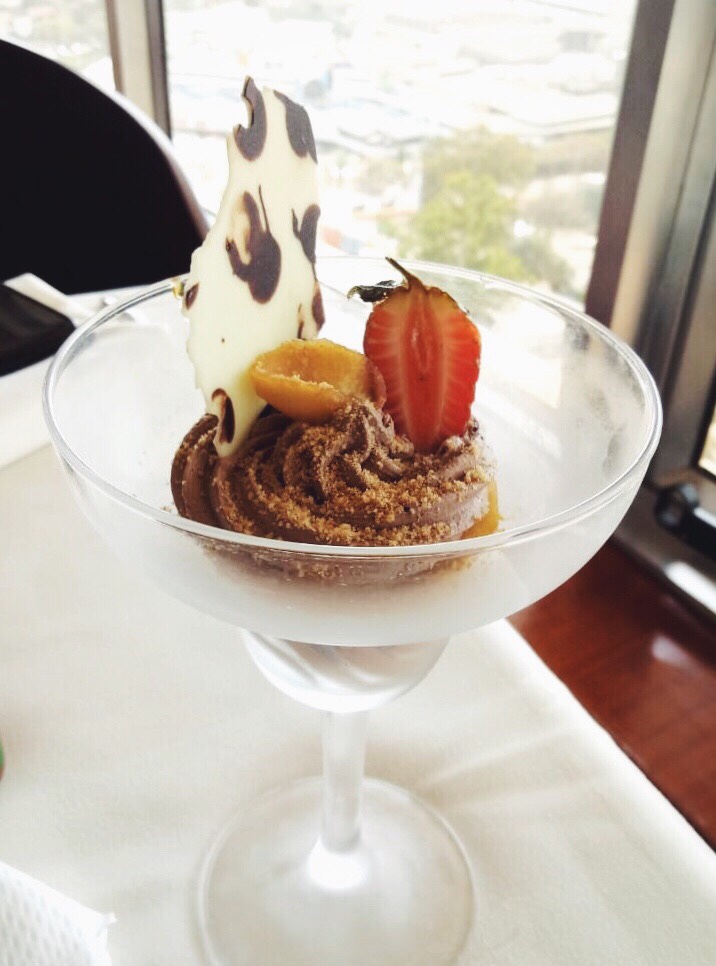 As we ate, we loved looking out of the large glass windows to see landmarks of the city as we rotated around. It was quite fun to see how quickly the urban city was growing too. In fact, we revolved 360 degrees in just about 80 minutes.

While we enjoyed our lunch with the Swiss-inspired dishes in a unique setting, I found the warm, friendly service to be a little slow, especially since we did have to go back to work after lunch.

So, if you ever find yourself in Westlands for a meeting around lunchtime, don’t fight the traffic. Just drive yourself to Mövenpick Nairobi and close the deal at The View with a nice business lunch overlooking the city.

Disclaimer: My co-workers and I ate complimentary, courtesy of Mövenpick Nairobi.