Prior to becoming the world’s most visited museum, the Louvre was a fortress in the late 12th century for Phillip II, the first person to be officially known as the King of France. Today, visitors to the Louvre can view the remains of part of the fortress’ medieval masonry.

After the most delicious breakfast at Angelina and a quick stop to Pierre Hermé , we just had to cross the road to get to the Louvre – a must for me as an art lover and artist. The famous 21 meters high glass pyramid, built in 1989, stands in the middle of the courtyard, Cour Napoleon, surrounded by the palace and three other pyramids. 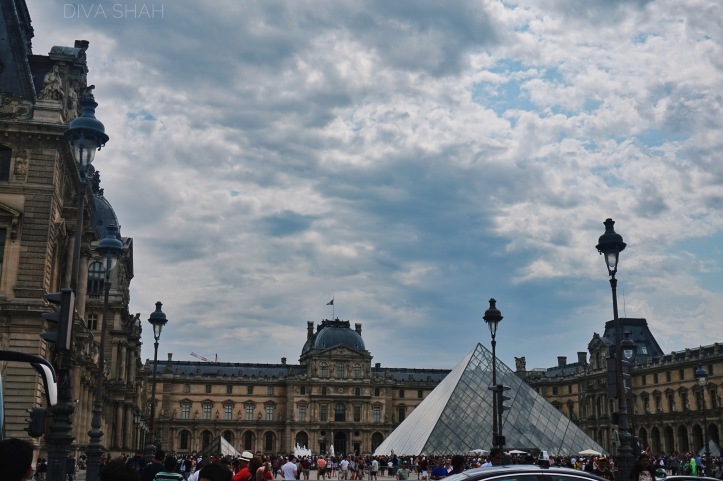 DID YOU KNOW?
A 5KM architectural line of monuments runs through central Paris to the West, which is known as Axe Historique. The Louvre is the nucleus and is located in the middle of Arc de Triomphe, the Grand Arche of La Defense and the obelisk of the Place de la Concorde.

With successive monarchs opting to set up house elsewhere, the Louvre fell into disuse until 1527, when Francis I ordered the demolishment of the original structure in favor of a lavish new Renaissance-style compound. A noted patron of the arts, he kicked off a century-long expansion of the Louvre – a series of new wings and freestanding buildings connected by galleries and pavilions.

On August 10, 1793, the Musée du Louvre opened its doors to the public. For more than 600 years, the Louvre had been a symbol of the wealth, power and decadence of the French monarchy. The confiscation and reconstituting of a former royal palace into a national museum was seen as an embodiment of the egalitarian values of the recent French Revolution. 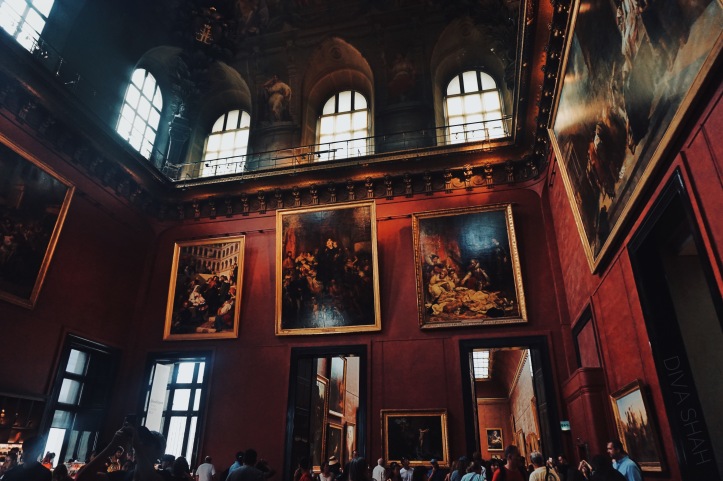 When Napoleon came to power, he temporarily renamed the museum after himself. Soon, the museum had a large collection as Bonaparte’s Grand Army swept across the region. Hundreds of paintings and statues were exhibited. But after Napoleon’s fall in 1814, more than thousands of pieces of art were returned to their rightful owners and the museum went back to its original name.

Then, during World War II, the Louvre became a clearinghouse for artwork stolen by the Nazis. The Nazis decided to use the museum as a clearinghouse to catalog, package and ship art and personal items confiscated from wealthy French (primarily Jewish) families to Germany. The Louvre, which had resisted working with the Nazis, was not very successful in repatriating its lost artwork.

Today, the Louvre is one of the world’s largest museums (with 70,000 pieces of art spread across more than 650,000 square feet of gallery space) and the most visited (8.8 million annual visitors). The vast art collection is divided among eight curatorial departments: Egyptian Antiquities; Near Eastern Antiquities; Greek, Etruscan and Roman Antiquities; Islamic Art; Sculpture; Decorative Arts; Paintings; Prints and Drawings. 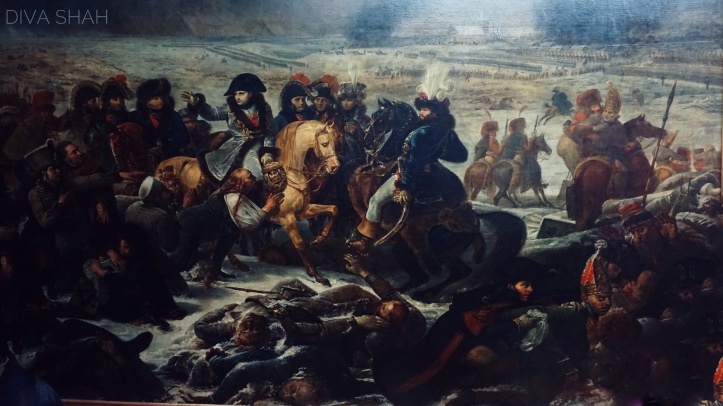 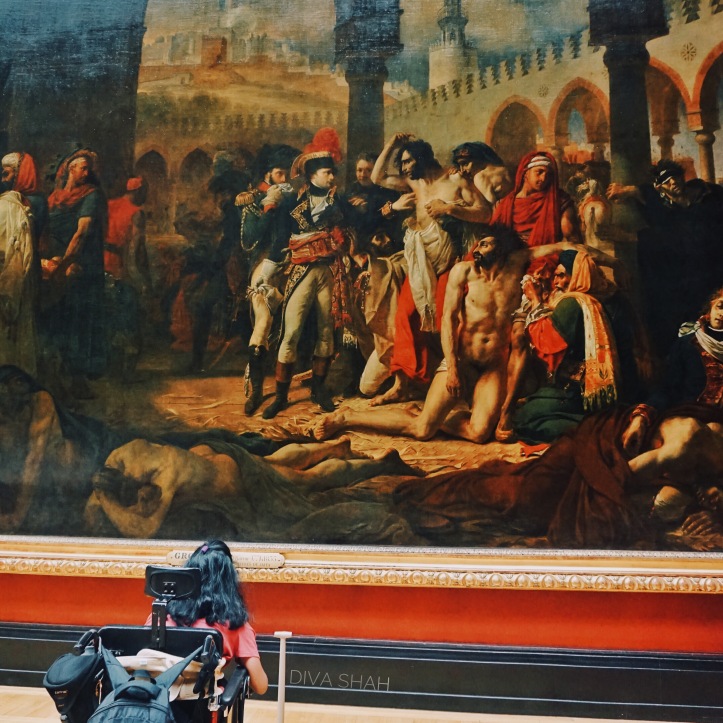 After reveling in some fine art and a few statues, we found ourselves at the one painting we had come to see: the Mona Lisa.

Started in Florence around 1503, the Mona Lisa is painted by the iconic Leonardo da Vinci. It is thought to be of Lisa Gherardini, wife of a Florentine cloth merchant named Francesco del Giocondo – hence the alternative title, La Gioconda. The history of the Mona Lisa is shrouded in mystery.

The Mona Lisa is the earliest Italian portrait to focus so closely on the sitter in a half-length portrait. The realistic painting with her emblematic smile has made this painting a classic ideal. Adding to the intrigue is the shrouded mystery behind the identity of the sitter, who commissioned the portrait, how long Leonardo worked on the painting, how long he kept it, and how it came to be in the French royal collection.

Obviously surrounded by a crowd, the painting is protected by bulletproof glass and its own bodyguards. In fact, the bodyguards ushered Diva and me ahead of the crowd, in front of one (out of two) barrier.  While I was exhilarated to see the painting without having to shove someone’s elbow out of my face, I was a little disappointed as it was underwhelming to see that it’s much smaller than I had envisioned it to be. 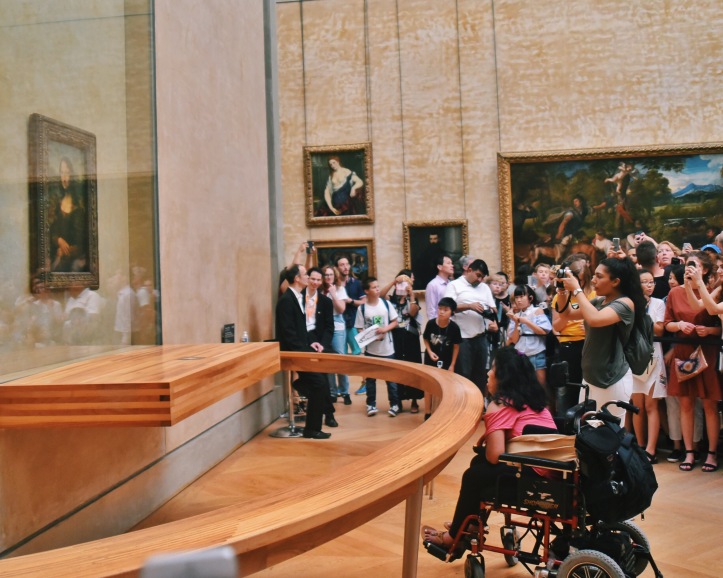 As we went around the rest of the exhibition, I was happy to have seen such an iconic painting. Exhausted, but satisfied, we headed out, before a short detour to the shops for a souvenir or two, and reflected on the incredible beauty in the museum.

Worn-out after a busy day exploring the city of love, we looked for a Maxi Cab (a huge struggle, AGAIN) to take us back to the hotel and started prepping for our journey back home.

The Louvre is located at:
Rue de Rivoli
75001 Paris
France