See, ever since I studied French in high school, I was obviously intrigued by the food and places in town chapters as I often envisioned myself traversing across the incredibly chic French fashion capital – Paris.

And as you probably know by now, after an incredible road trip through Switzerland, we took a train, switching at Basel, to arrive at the largest train station in Paris: Gare De Lyon. After descending from the train in the humid summer heat that Paris is known for, we passed hordes of other tourists on the walk over to our hotel: the Novotel Paris Gare De Lyon.

A simple hotel with a pool and nice rooms, we didn’t spend much time in the hotel for me to do a review as our days were often spent exploring. However, they did have a delicious buffet breakfast with lots of scrumptious French bread and pastries. One of the reasons we had opted to stay right outside Gare De Lyon as opposed to other Parisian tourist attractions was that I had found numerous reviews online saying that the tour buses were wheelchair friendly. Having used the hop-on-hop-off tour buses in New York City, I knew this was an ideal way to explore everything I wanted to do in the city.

So once we arrived in the city and had settled in, we walked out to the nearest bus stop for the tour bus and waited. One bus came by but it didn’t have the wheelchair access so they told us to wait for the next one and so we did. Then we waited and waited and two hours dragged on. Anguishing in the summer heat, we gave up and ventured into the nearest restaurant with vegetarian food. And that’s how we found ourselves in a Tunisian-owned pizzeria devouring slice after slice before turning in for the night, defeated. (Of course, even while waiting in the heat, I couldn’t help noticing how beautiful French architecture is. Even the tiniest of the tiniest balconies looked so chic!) 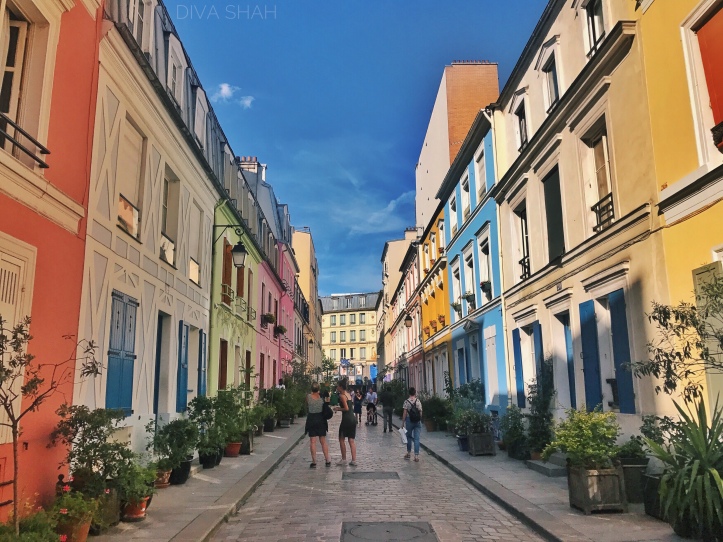 Angered by this experience, the next day we took a Maxi Cab (a large taxi which could accommodate my wheelchair) to the Notre Dame Cathedral and then walked over to Breizh Café for some crepes.

Then, we walked back to Notre Dame where we found another bus stop and we waited and waited. Realizing that this is a repetitive cycle, we scoured for a Maxi Taxi. After a gruesome hunt in the heat, twenty minutes later, we got off at the Tour Eiffel.

Visited by millions of tourists, the 1,063 ft-tall Eiffel Tower is a sight to behold. The Eiffel Tower is a rigid, iron structure, built originally for the 1889 World’s Fair by Gustave Eiffel. He used latticed wrought iron to construct the tower to demonstrate that the metal could be as strong as stone while being lighter. Just intended as a temporary exhibit, the Eiffel Tower was almost torn down and scrapped in 1909, however, city officials opted to save it after recognizing its value as a radiotelegraph station. Today, the tower continues to serve an important role in television and radio broadcasts and is considered an architectural wonder. The tower, which has 5 billion lights on it, twinkles for five minutes every hour at nightfall. Unfortunately, due to long summer daylight hours, we missed this.

Located at the intersection of the Quai Branly and the Pont d’Iéna, we stood in the very long line for the tickets to go up the tower. I managed to get disabled access and so could skip the queue to the top, however only one person was allowed up with me. Eventually, we convinced them that two people should come with me, in case I needed assistance, so Dad and Diva accompanied me.

We took the lift up to the second level to soak in the views of the city. Since it isn’t too high, the views are great, but not phenomenal. Besides gift shops, the tower has two restaurants: Le 58 Tour Eiffel on the first level, and the Michelin-starred Le Jules Verne, a gourmet restaurant with its own lift on the second level. Additionally, there is a champagne bar at the top of the Eiffel Tower.

After coming down, we found a wheelchair-accessible hop-on-hop-off bus and sat inside. 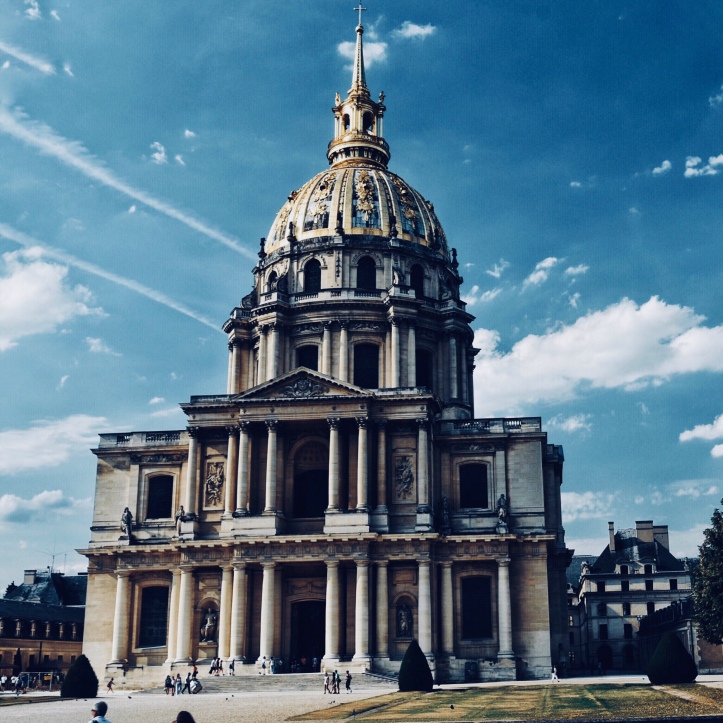 As we cruised through Paris, the bus came to a halt somewhere and we were told to switch to another one, as our bus was spoiled. In this chaotic switch, the conductor forgot to get our payments. This bus dropped us off at the iconic Arc de Triomphe. 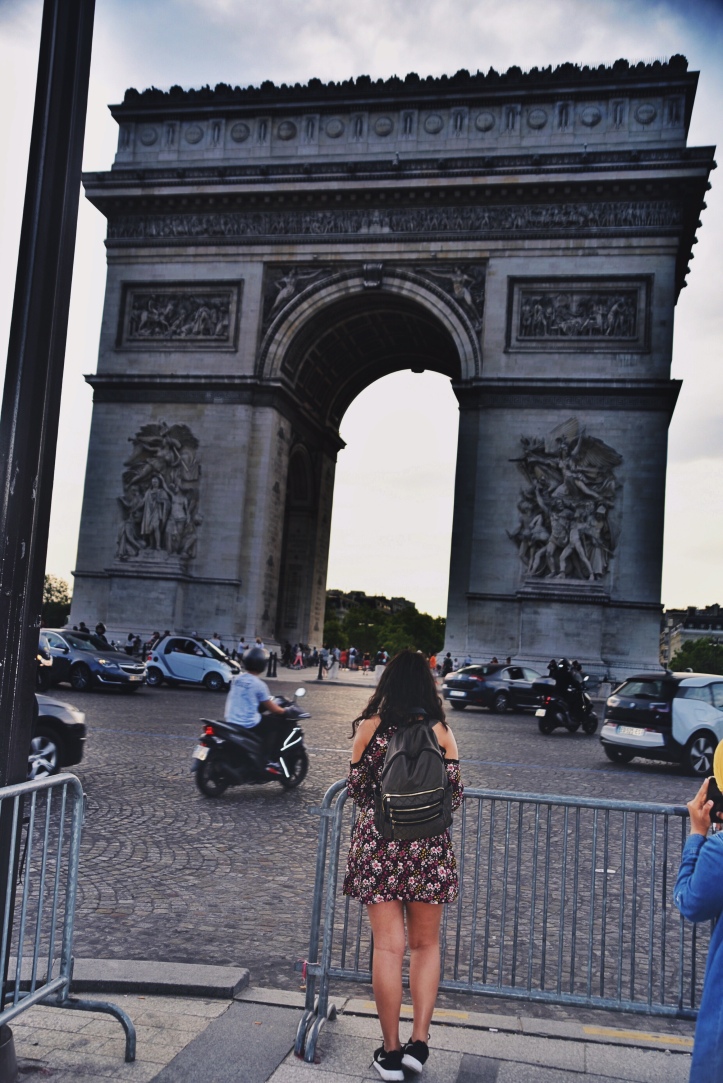 One of the most monumental of all triumphal arches, the Arc de Triomphe was built between 1806 and 1836. Located at the western end of the Champs-Élysées, the monument is an honor for those who fought for France, in particular, those who fought during the Napoleonic Wars. Engraved on the inside and at the top of the arch are all of the names of the generals and wars fought. The arch’s whole decorative style is sculpture from the first half of the 19th Century. There are inscriptions on the ground underneath the vault of the arch which include the Tomb of the Unknown Soldier from World War I where the Memorial Flame burns. This has made the Arc de Triomphe a revered patriotic site. It is said that the views from the top are incredible, however, it is not wheelchair accessible.

After snapping a few pictures at the arch, we walked through the iconic Champs-Élysées. While this area used to be a field, it was slowly transformed in the 17th Century, when Queen Marie de Medici (the wife of Henri IV), who loved her Tuileries Garden, decided to create an avenue of trees and so the change began. Later, Louis XIV commissioned the great French gardener André Le Nôtre to extend and transform the “Grand Cours” as it was known into the “Avenue des Tuilleries”.  Over the years, this corridor of trees grew and in 1709, it was given the name “Avenues des Champs-Elysées”. The name translates as Elysian fields – where Greek Gods and heroes went after death according to Greek mythology.

During the 18th Century, grand houses and the Elysée Palace, now the official home of the French president, was built along the avenue. While the area was home to palaces and buildings for the rich and aristocrats since the 1600s, it became a fashionable spot by the 1800s, and soon fountains, gas lamps and footpaths were built.

Today, the 70-meter wide and 1.9km-long Champs-Élysées is home to luxury shops and businesses, restaurants, cafés, theatres and museums. It stretches from the Place de la Concorde to the Arc de Triomphe and attracts millions of visitors every year.

We strolled through the street, shopping a little and then dined at a small cafe before Diva and I headed to the original Ladurée store to pick up a box of macarons for the taste test. Diva captured this gorgeous sunset shot as we crossed the road back to the cafe and I almost fell into a pothole on the road. 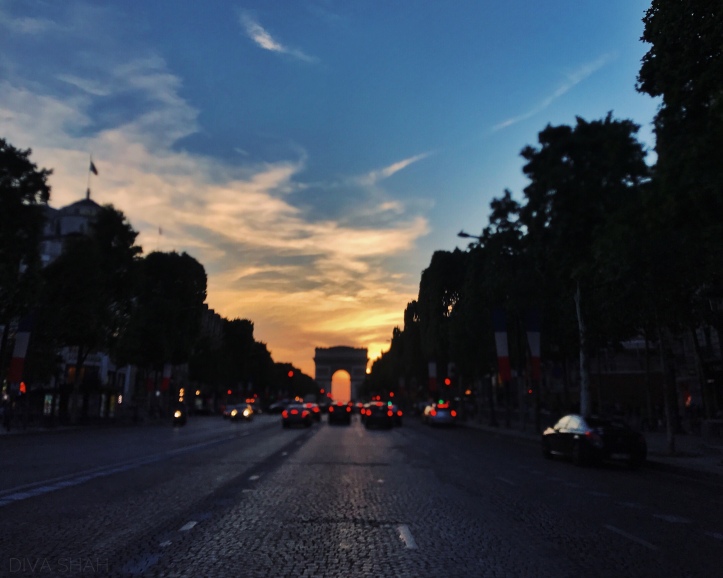 Then, exhausted, and with little energy to find a wheelchair accessible hop-on-hop-off bus, we asked our wonderful server from the café to call us a Maxi Cab back to the hotel as no one was answering the Maxi Cab hotline.

And so while I absolutely adored French food, architecture and art, I didn’t fall in love with the city of love because it wasn’t ready to commit to my needs. I guess it’s me, not you, Paris.

(My Parisian affair isn’t over though, so look out for what else we did in the city of love on the blog soon.)