After spending some time on gorging on the delicious Swiss Lindt chocolate, we decided it would be nice to spend some by the serene Lake Zurich. 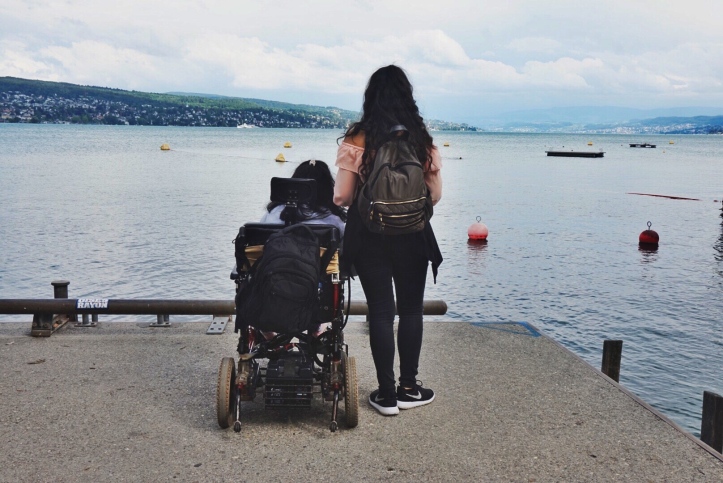 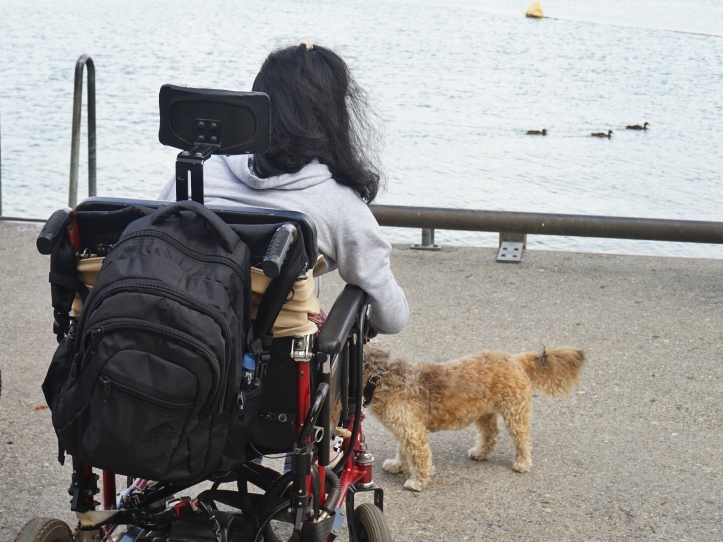 So after plugging in the address for a parking lot near the lake (to save time looking for a parking lot at our final destination), we set off. But then, somehow we ended up at the parking lot by Strandbai Mythenquai – a public bath in Zurich by the banks of Lake Zurich. Of course, we didn’t realize this till we had to pay entrance fees to the Mythenquai Bathing Resort. 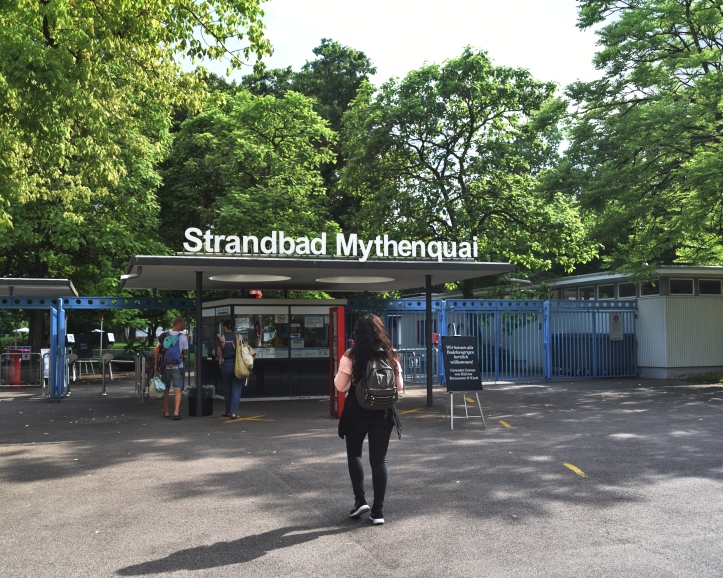 Without any swimming costumes, we just went in and sat on one of the benches, admiring the serene beauty of the lake. Sigh… perhaps, it didn’t matter if we didn’t end up at the Lakeside Promenade (a popular hangout spot overlooking the lake in the summer), just five minutes away, as we could still enjoy the lake views and its crystal clear waters. We could even see the other side of Zurich city. 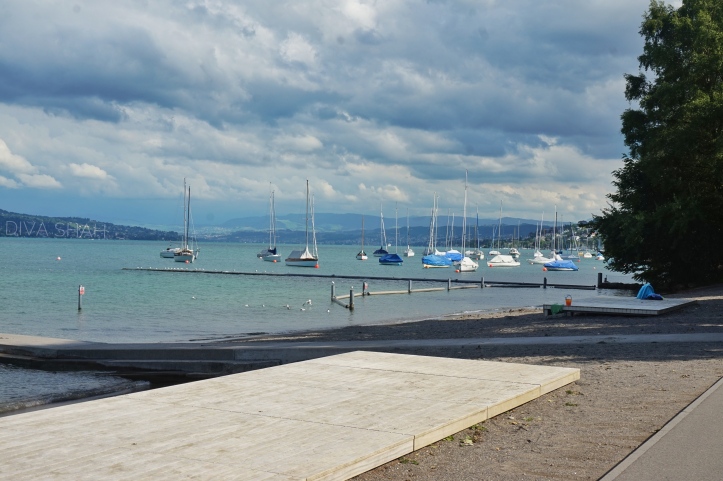 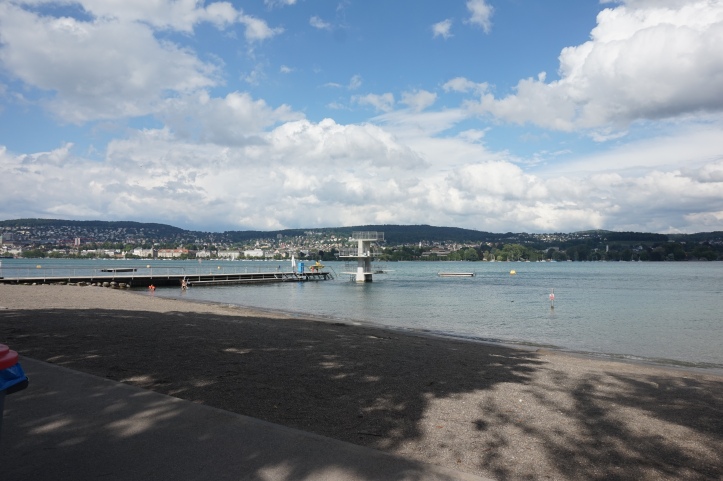 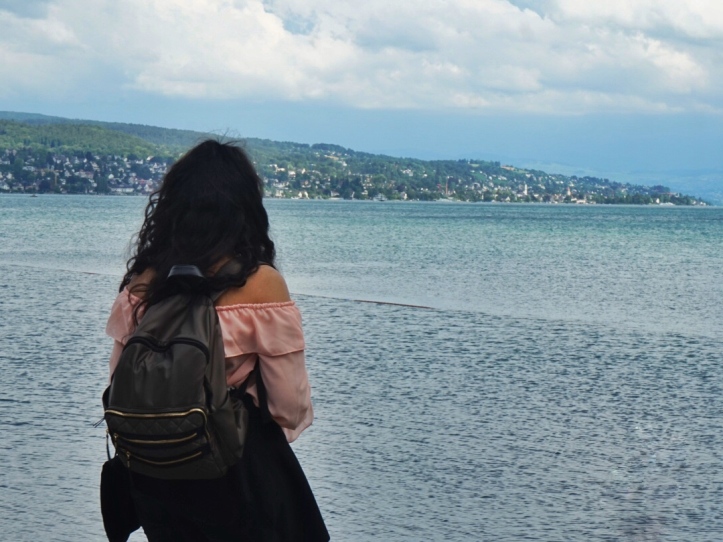 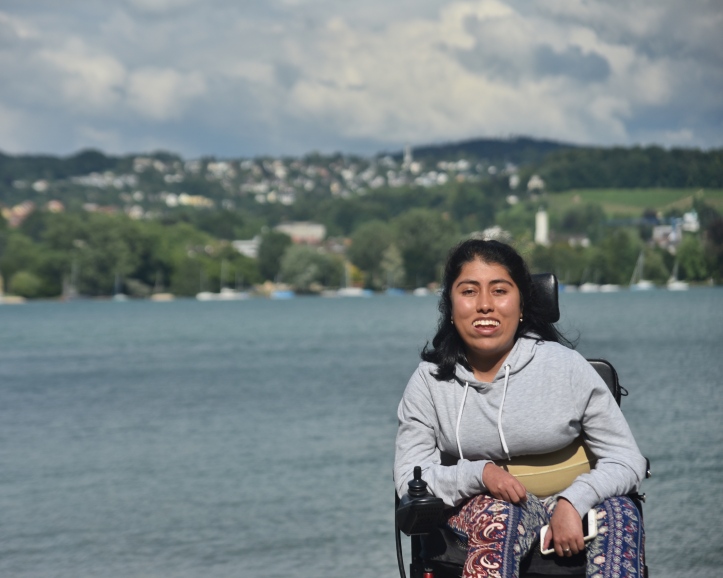 The Mythenquai Swimming Beach, that originally opened in 1922, has a 250-meter sandy beach with a spacious sunbathing lawn. There is a variety of facilities including a water games facility for children, table tennis boards, barbeque spots and a Hiltl kiosk and buffet stand. Honestly, it reminded me of a Kenyan gymkhana, except that it was located by a spectacularly beautiful lake. 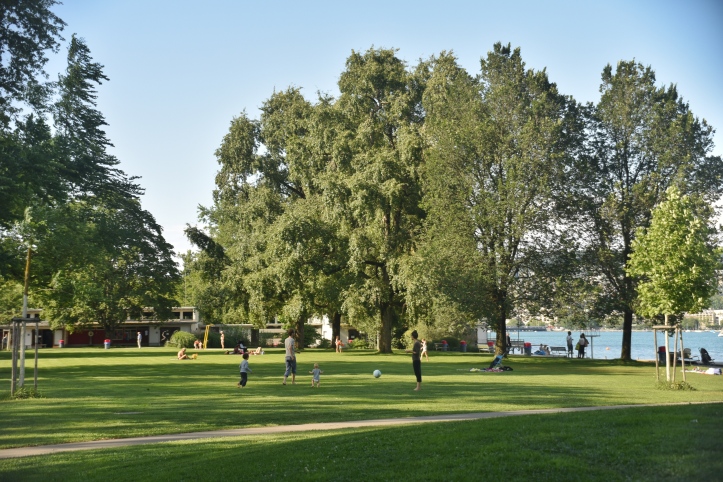 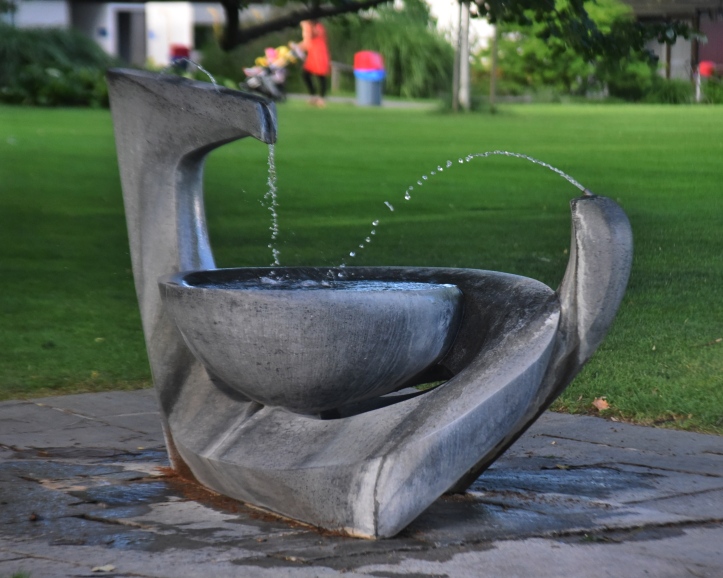 Speaking of the lake, the bent, almost banana-shaped Lake Zurich is surrounded by the Albis and Zimmerberg hills in the south and by the Pfannenstiel chain of hills in the north. At the western end of the lake lies Zurich, Switzerland’s largest city.

In the past, the lake was a route for traffic and transport, but today it is a popular place for excursions. One of the best ways to explore the lake and its surrounding is on a boat trip, gently rocking to the water currents soaking in the peace and tranquility.

Lying at an altitude of 1332ft above sea level and with an area of about 88km2, an extreme length of 40km, a breadth of 3km and an average depth of 49 meters, Lake Zurich is formed by the waters of the Linth River, which rises in the glaciers of the Swiss Alps. The waters of the Lake Zurich flow out of the lake at its northwestern side, passing through Zurich city, where the outflow is then called the Limmat. 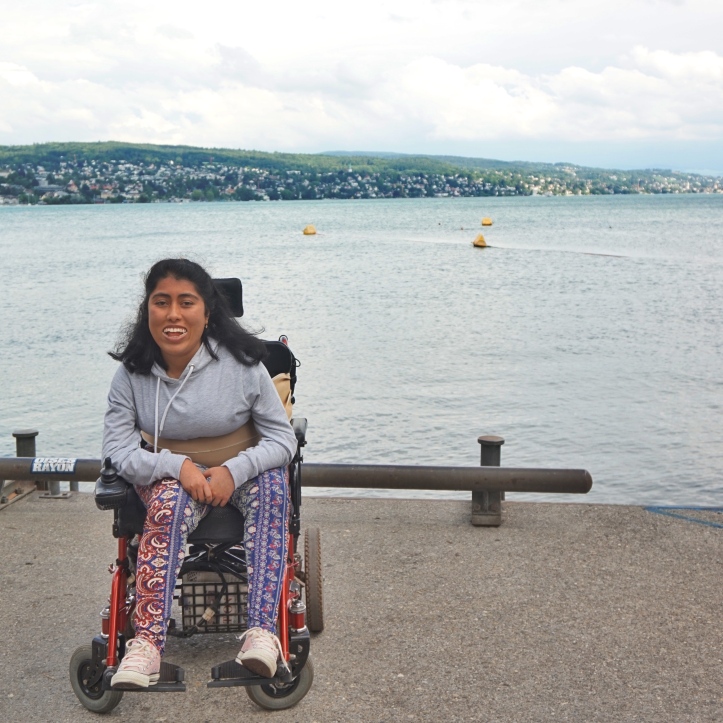 On the northern side of the lake, from Zollikon to Feldmeilen lies the famous “Golden Coast” where the sunny region is renown for its low tax rates and high property prices, so there are lots of majestic houses and villas to admire.

At the eastern end of the lake is the “Rose Town” of Rapperswil, where they have over 600 varieties of the rose bush blooming. It is also home to the colorful Lakeside Promenade and the picturesque Old Town.

If you are adventurous like Diva, you’ll love the vast choice of watersport activities available, ranging from sailing, kayaking, and swimming to surfing and wakeboarding. Recently, stand-up paddling has become rather popular.

After a revitalizing time just relaxing by the lake, feeling a little peckish, we proceeded to the Hiltl kiosk behind the sunbathing area, not knowing that it was a fully vegetarian restaurant franchise under Haus Hiltl, that holds a Guinness World Record for being the oldest, continuously-open vegetarian restaurant in the world. 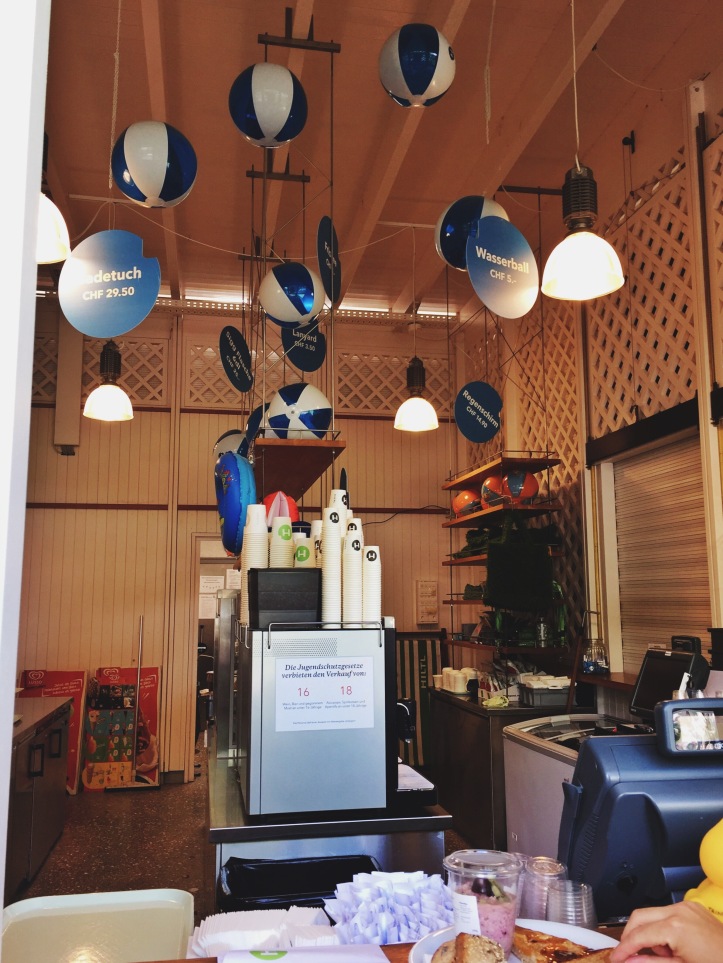 We just ordered some Pommes Frites here as they didn’t seem to have a lot of choices to pick from. Or perhaps, our lack of German skills hindered us from understanding the menu offerings properly. I’m sure the staff were a little frustrated by my constant barrage of questions regarding the food available. Nevertheless, the potato fries were crispy and fried to perfection. 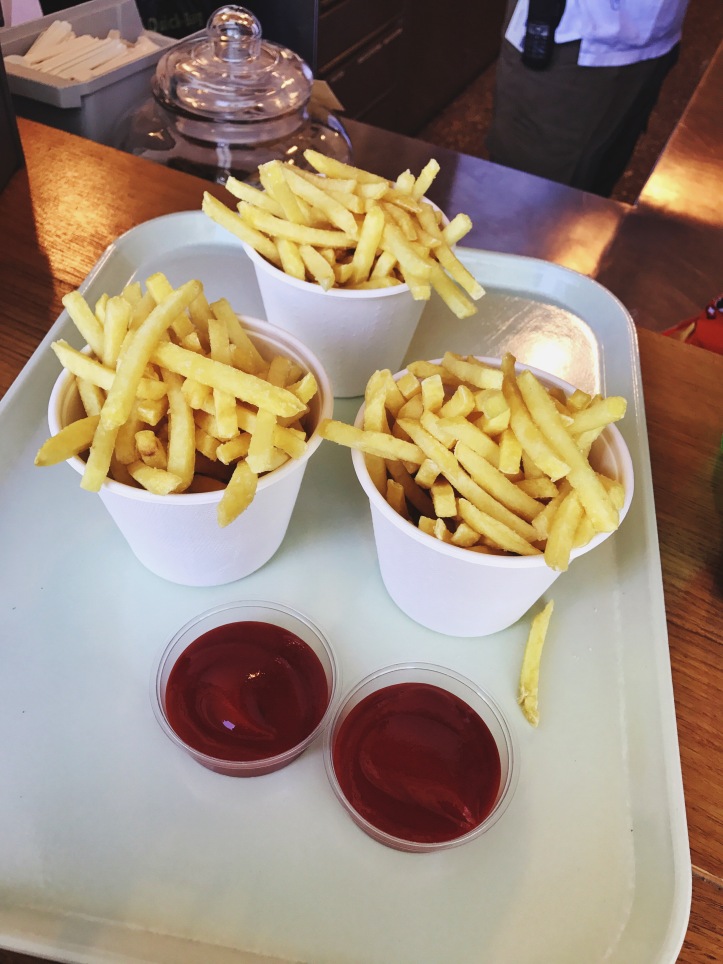 After spotting it on the menu, I had to try the Pistachio and Matcha Vegan Ice Cream. I had never tried vegan ice cream before and I fell in love with the earthy tones from the matcha and the sweet nuttiness from the pistachio. But what I really enjoyed was not feeling weighed down by the delicious treat, that I would have otherwise felt by a regular, dairy-filled ice cream. 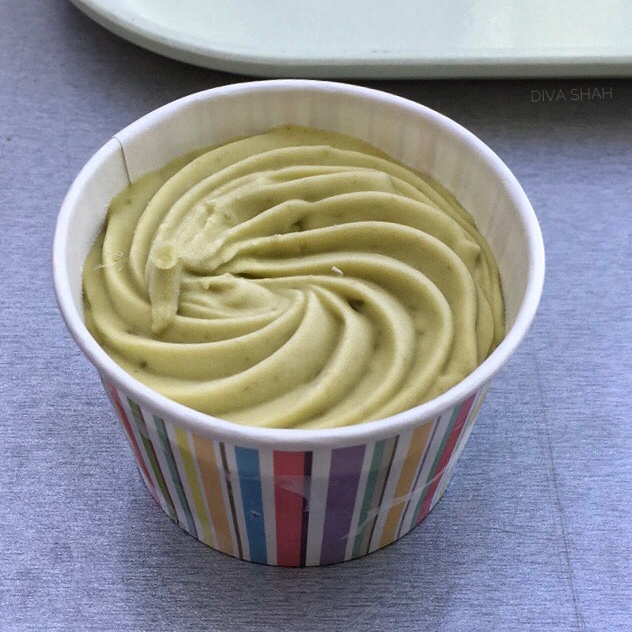 After devouring the fries and ice cream, we headed back to the car just in time for it began to drizzle.