Have you ever had a meal or dish so good that you dream about it? Yes? Oh, thank heavens, I thought I was the only crazy one. (If you said no, please don’t lie to yourself).

So back to my London adventures…

After an incredibly long, but amazing day of having a delicious brunch at The Breakfast Club, visiting the iconic Tate Modern, and exploring Bankside and beyond, we ended the day with a fabulous dinner of spectacular sourdough pizzas at Franco Manca.

Now, I had a list of places to visit on my short trip to England, but Franco Manca was not on my list, and we only ended up there after Saj suggested it, when discussing dinner options.

So after drinks at the More Bar, our families walked down to Bermondsey Street, a brisk 10-minute walk, and we met up with my cousins outside the restaurant. 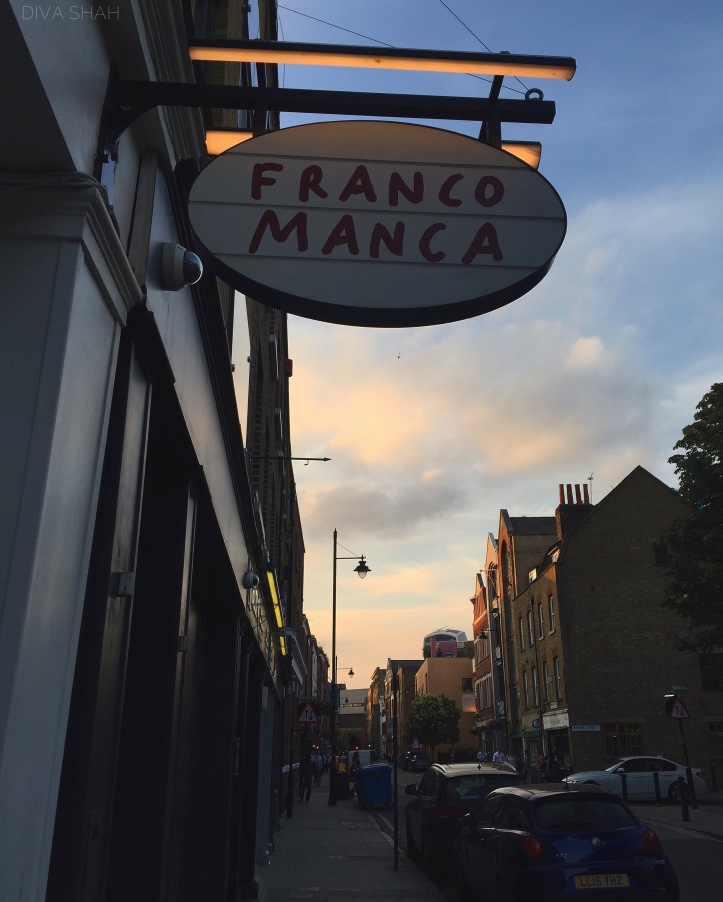 Franco Manca does not take bookings, so I figured as a large group, we may have to wait, so we huddled on the street outside. But somehow, ten minutes later, we managed to get two tables, and we went in.

It was only 6:30pm in the evening, but the tiny, compacted restaurant was packed. Dimly lit, the restaurant gave off rustic vibes with wooden tables and benches, in front of an open kitchen, where you could watch chefs prepare your food, which is both torturous (my poor hunger pangs!) and fun to see how your food is made. The patterned tiles on the walls added more flair to the minimalistic atmosphere of the restaurant.

There were about three steps to get to our tables on the upper end of the restaurant, and as I grew hesitant trying to figure out how to get there, the hostess quickly set up the wheelchair lift, and within a minute or so, I was already on the other side (Cue: Adele’s Hello from the other side…”). Now, this was a feature I wish was more popular in Nairobi.

We sat down, and I browsed through the simple paper menus. Franco Manca thrives on simplicity, where they only offer six pizzas, two salads, some wines and soft drinks only. The back of the menu highlights the less-known vegetables and also tells you where the meats and cheeses are sourced from, along with some reviews from British media.

There are only two vegetarian pizzas on the menu, but I feel that this small, simple menu works amazingly well for Franco Manca, as they have been able to fine-tune their recipes over time. What makes their pizza special is their sourdough.

Their pizzas are made from slow-rising sourdough that is baked in a wood-fire oven at 500℃ (900℉). The soft and easily digestible crust is as a result of the slow levitation and blast cooking process that locks in the flour’s natural aroma and moisture. Thus, the edge of the pizza (crust or cornicione) is excellently crisp.

This system was originally developed by the Greek settlers who in the 5th century BC founded Neapolis (New Town). They adapted a pre-existing baking tradition to develop this new ‘Pita’, which through experimentation, luck and linguistic distortions, became pizza. This recipe has been developed under the leading light of Marco Parente and Giuseppe Mascoli.

We all ordered the Tomato, Mozzarella, Basil pizzas. These sourdough pizzas were incredibly delicious. The thin crust was crisp at the edges, with the accent of sourness shining through, adding to the intricacy of the flavors. The mozzarella was perfectly melted through, and the basil added a fresh green twist to the pizza.

Diva had hers with an Organic Lemonade, which was served in those cute vintage glass milk bottles. It was simply refreshing, though I decided to stick to water, after a whole day of spoiling myself in central London.

Despite being busy, the service at Franco Manca was quick and efficient, making sure I had no complaints. Plus, I had assumed that due to its popularity, the food would be on the higher end of the price spectrum, but the prices were great for the quality value.

After a simple, but scrumptious meal, we all managed to get home, before passing out in a food coma. And in an unforeseen twist, my wheelchair battery literally died just as I turned into our street. I hadn’t realized how much exploring I had done all day!