Living in a concrete city like Nairobi, it is often hard to find green spots to get in some clean, fresh air. The River Cafe, previously at The Rosslyn Centre, was one of the al-fresco eateries in Nairobi. Nothing compared to eating delicious food with great company under the Kenyan sunshine surrounded by exotic birds and beautiful plant life overlooking a lily pond. When they temporarily shut down in January 2015, many including I were upset because nothing compared to its setting. So when they announced that they were opening in the Karura Forest (one of my favorite green locations in Nairobi), I had to visit…

On a cold, grey Sunday morning two weeks ago, my family and I found ourselves at the River Cafe. We parked the car by the Amani Gardens, a picnic site within the forest, and strolled into the cafe.

I needed assistance from my dad as the entrance to the cafe was very rough.

I immediately saw two dogs – so cute and they made me miss my dogs at home that I had just left half an hour ago (YES! I’m this weird). The hostess led us to a table and on the way there, we bumped into friends and family. It was already a social affair.

Our table was by the edge of the cafe giving us a clear view of the emerald-green forest. The foliage reminded me about Alaska where green forests painted against a cloudy, grey sky was a common sight, mostly because it is increasingly hard to find greenery in Nairobi.

As we settled in, the waitress brought us all menus. Now, the River Cafe, as their general manager, Mrs. Joy Sunshine, revealed is doing just a soft opening and they had, in fact, not officially opened. This meant that their menus, layout and staff are still under trial and constantly being updated. Printed sheets on a clipboard sufficed for the menu.

The menu was far different from the original River Cafe menu. There were several brunch and lunch options, although there were very few vegetarian options. I hope more options will be added soon.

As we waited for the food, we appreciated the cafe’s atmosphere. The cafe had a rustic feel to it with its minimalist layout with chalkboard signs and simple wooden tables and cushioned chairs laid out across the wooden deck, overlooking the vast green forest. There were several tables already filled up. Some patrons were cold and so they were given the classic red and black Masaai blankets to keep warm from the cool, chilly wind. It was just so serene and peaceful to sit there and I could find myself slipping away into my dream world amidst all the noise and chatter around me.

Soon, the food arrived! My two-egg omelet with tomatoes, onions, peppers and mushrooms was soft and savoury served with two slices of buttered brown toast. I quickly scarfed it down, or tried to (considering that I’m a slow eater 😉 ).

Diva and Dad’s soups were seasoned well and served piping hot. The soup was warming to the soul, as we were cold. Mom’s veggie burger had a chickpea-based patty that was smothered in a creamy sauce. It was well flavored but it needed, according to me, a spice kick. It was too bland for my taste buds.

The halloumi salad was perhaps the least-liked dish that day. The halloumi cheese was breaded and fried and served over a bed of sliced tomatoes and topped with lettuce. The flavor was too plain and I just found it simply boring. I wanted something simply more exciting for my taste buds.

At this point, we were too full to even think about ordering dessert, though I did spy some pretty-looking chocolate cake and chocolate brownie on my neighbor’s table. Sigh! For next time now… 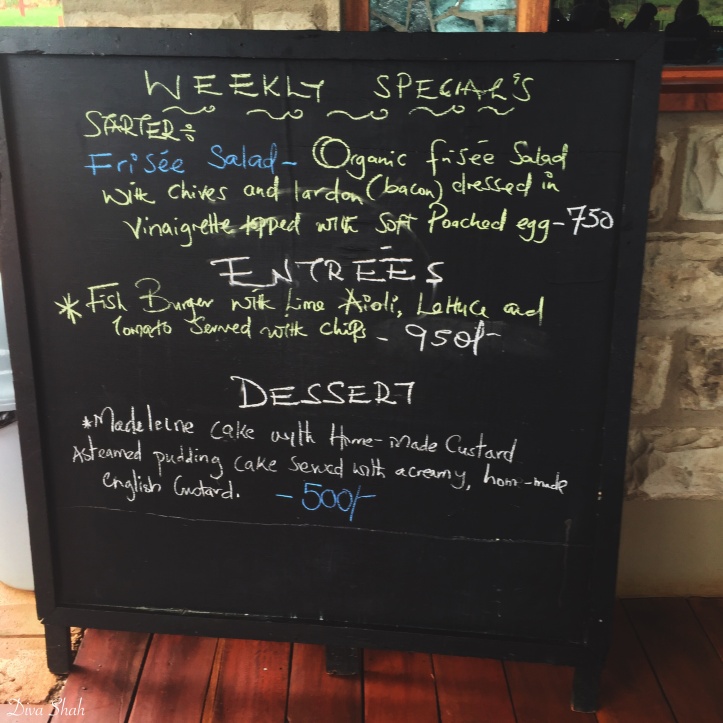 Overall, dining at the River Cafe was a pleasant experience and I definitely look forward to going back!

UPDATE: Upon a recent visit to The River Cafe, I noted that there is now complete wheelchair access to the cafe. Their menu is also updated and contains a plethora of vegetarian and non-vegetarian dishes to choose from.

TL;DR – Want to have a relaxing brunch or lunch surrounded by nature? You know where to go!

Pictures for this blog post are provided by Diva Shah Photography.